In 2003, after struggling for an hour and a half with a conventional screwdriver to switch out a car door stereo speaker, Joel Townsan thought, “Why don’t they have power tools that transform or something?” This was the day that Joel’s idea was born. 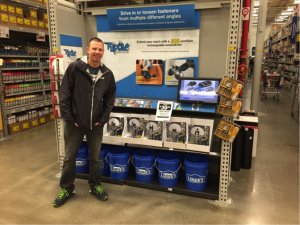 Flipout Screwdriver’s mission is to create a new kind of power tool. Joel’s research showed him that there was a lack of power tools on the market that allowed the user to effectively deal with tight spaces. The Tantrum screwdriver is the answer to this consumer dilemma. When he realized he had taken the product idea as far as he could on his own, Joel came to the NWIRC looking for help with how to build his business. Through the BuildIt program, the NWIRC provided Joel with a customized plan on the steps necessary to develop a business strategy, plan, and the financials to support his product idea.

Beyond Invention, the creation of an Industry

Ready  to Get Started?

Click below to learn more about the programs and resources best suited to your needs.

Not sure where you fit in?

Contact us today, and someone from the NWIRC will be in touch shortly to help you make the best use of our resources.