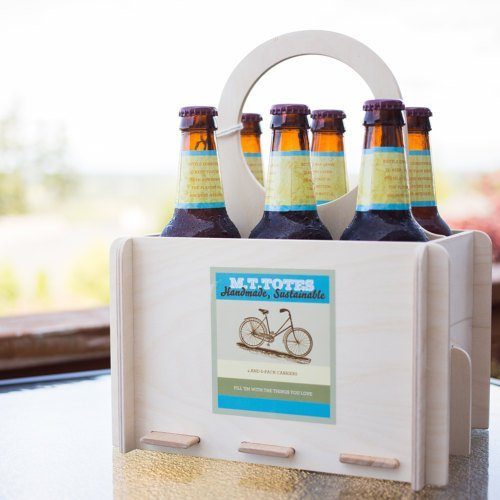 Product: M.T. Totes – a clever play on words for a clever product. M.T. (Mary and Tom) as well as Empty, because they

are only empty until you fill them! Sustainable wooden beverage totes that come together without needing nails or

How did you come up with your idea?

“We were heading to a friend’s birthday dinner and had stopped by the market to buy a selection of different beers,

essentially building a unique six-pack. But a bag full of beer bottles as a gift just did not cut it. I wanted something that

would actually be part of the gift and remain long after the beer was gone- kind of like a gift that would keep on giving.

for glue or nails. This also made it collapsible, which we thought would be great for display and shipping. Not to mention

it is fun: It goes together like a puzzle, except you won’t get stumped! After the first beer version, we needed a wine

one, then a coffee version and from there a whole fleet was born, including a 2-bottle growler which is our most recent

What made you decide you wanted to go forward with the idea?

“We originally gave them as gifts to friends and family and everyone really liked them.  People especially loved the way

they are put together, the sleek design, and how functional they are. You can carry a lot of different things in them. We

also felt that they are right in-line with the current trend towards reusable packaging. Living in bag-free Bellingham, it

seemed like a pretty good market in which to try them out. Another turning point was when a friend recommended

NWIRC to us. Getting solid advice and having an advisor was very encouraging in sticking with the idea. This past holiday

we were featured on the Today Show which was also very validating. They chose our totes amid a sea of similar products

on Etsy. This created a very busy 2015 Christmas Season, a full 2 years from the first bunch we made for friend and

“The very first tote made was definitely a process. As simple as the finished product looks today, developing the design

and how it all fits together snug and secure took a lot of experimentation. We (Tom) probably played around with it in

our (his) spare time for about nine months before making the first bunch for Christmas gifts. Once we actually started

using them, we found we needed to tweak the design &amp; make adjustments, mostly to accommodate different size

bottles. We started selling online the following spring laboriously hand-cutting pieces with a jig. Eventually, we were

able to have them made on a CNC Router, which helped reduce manufacturing time, but it wasn’t until we moved to

The laser became a game changer for how we did things, not only could we cut quickly and precisely, but it allowed us to

start doing personalized totes with any logo, name, picture someone wanted. Overall we’ve been fortunate to keep our

expenses low and test the market and making small quantities. However, we find ourselves at a very exciting point

where we are ready to take it to the next level and purchase our own equipment.”

Anything else you want to add?

“One of the great things that has happened is to hear that the totes are finding their way to handicapped, elderly and

nursing home residents. They are a great way to carry beverages from the dining hall or kitchen to other rooms of the

residence. Makes it easy for those with a cane or who feel unstable to transport their drinks without spilling.”